The announcement was made at the Monaco Yacht Show, where Gulf Craft revealed the riveting new concept designs for the 61-meter Majesty 200 and the 53-meter Majesty 175, both ready to be constructed upon order and offering an exceptional degree of owner customization.

The Majesty 200 is set to be Gulf Craft’s ambitious move into the world of megayachts, and will be built using the latest engineering technology. Meanwhile, the Majesty 175 will be completely produced using advanced composites, expanding the possibilities of using such material for the production of megayachts. 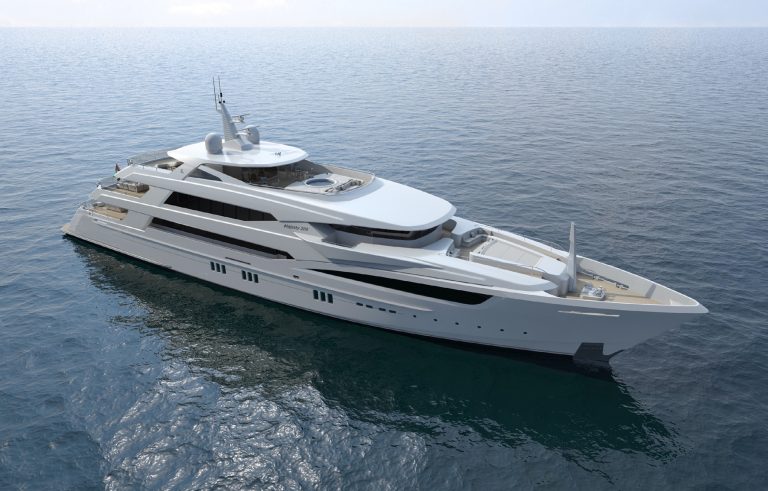 The news follows on the heels of Gulf Craft’s European debut of its flagship superyacht, the Majesty 155, at the Cannes Yachting Festival. The builder received an overwhelmingly positive response from visitors and prospective owners in Cannes.

The designs of both the Majesty 200 and Majesty 175 include an abundant list of remarkable features, including retractable helipads, opulent interiors, beach clubs, and extensive lounging and entertainment areas.

“Gulf Craft has grown and evolved with its customers -we identified the milestones that lie ahead and set out to realize them. Yet we did this while simultaneously listening to our clients, learning from them along the way and using their insights as the source of inspiration behind each one of our creations,” said Mohammed Hussein Al Shaali, Chairman of Gulf Craft.

“Our aim is to continue redefining superyacht manufacture in advanced composites to a size once thought impossible, all the while creating bespoke cruising experiences for our customers. Our ceaseless determination has led to this very moment, one where research and development meets megayacht design.”

Erwin Bamps, Gulf Craft’s Chief Executive Officer, said the decision to venture into the world of megayachts comes as a natural progression for the company, which for more than three decades has been helping seafarers explore the world’s waters with its expanding portfolio of oceangoing yachts.

“Gulf Craft’s spirit has always been one of great ambition,” says Bamps. “There were challenges to the size of yachts we can build, but we strived to overcome these limitations – in the last three years alone we successfully launched the Majesty 155, the Majesty 135, and the Majesty 122, and we have received multiple successive orders for each.”

“Today, rising private wealth combined with growing worldwide interest in the yachting lifestyle, and a strong desire to spend more time on water, is creating an emerging demand for products that can deliver the ultimate luxury cruising experiences in both engineering and design,” adds Bamps. “And now, with the introduction of the Majesty 200 and the Majesty 175, we continue to push the boundaries of innovation, redefining the possibilities of yachting, and transforming our customers’ most lavish seafaring aspirations into reality.”

The Majesty 155 is continuing its journey through the French Riviera, with a brilliant showcase at the Monaco Yacht Show. Earlier this year, Gulf Craft’s flagship superyacht won the coveted CEDIA Award for ‘Best Yacht Installation’, signifying the builder’s capacity to deploy the best that entertainment technology has to offer across the largest of its craft. The shipyard has also received a second order of the Majesty 155, which it is aiming to deliver by next year.

Guests can visit Gulf Craft’s superyachts in the T-Central area at the Monaco Yacht Show, where the manufacturer is also showcasing its latest tri-deck superyacht, the Majesty 110 – yet another European debut that offers owners three decks of copious, semi-customizable space.